Welcome to Monster Movie Madness, where we take a look at flicks and films dealing with threats and things that aren’t exactly human. Hell, most of ’em aren’t human at all—and those are the really fun ones!

I scrolled through the list again, looking only at release dates, and found four films in there, all of which came out on October 1, 2019, straight to video-on-demand.

So this month, I’m checking out one of these films each weekend and throwing up a review. Straight to video tends to carry a negative stigma, but there might be a gem or two on the list, right? 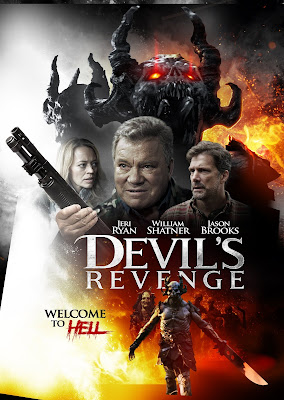 
Warning: this review may contain spoilers. (But probably not.)

Three spelunking buddies enter a cave. They work their way deeper, moving through open caverns and squeezing through bottlenecks, eventually reaching the end. Tired, they want to go back—all but one, John (Jason Brooks), who hears a sound. Following John’s ears, they find a wide opening to a larger cavern just a few feet away (so much for it being the end) with a sharp decline to the floor. Paul (Brendan Wayne) slips and rolls down the decline, breaking his ankle. John and R.J. (Phillip Andre Botello) hustle down to help, but John hears the sound again and follows it, leaving an injured Paul and impatient R.J. behind.

The cave opens up into a brickwork chamber filled with evidence of an ancient battle: weapons, skeletons, the works. John spots something he obviously thinks important (an ancient figurine, maybe the size of two footballs lain end-to-end), but takes his eyes off it during a coughing fit and it disappears. Heading back to where he left the others, John first thinks he sees a creature of some sort—which vanishes—then finds R.J. gone and Paul slashed, bloodied, and dying. John tries to help, but Paul is too far gone. R.J. reappears, finds John standing over Paul’s body, and starts berating him, saying all this is John’s fault because he "just wouldn’t let it go."

Cut to John driving home and on the phone with his wife, Susan (Jeri Ryan), telling her about Paul. Unfortunately, he hangs up before the visions come: flashes of demonic figures and fire, terrible things happening in that brickwork chamber he found so far beneath the earth. During the visions comes the heart attack, which causes him to swerve his SUV off the road into a tree. More visions, more heart attack, and we fade to black.

From here on out, it gets weird.

I'm going to be a little more spoilery, but I'll try not to go overboard.

It turns out John's whole family line is under some ancient Aztec curse (There were Aztecs in Kentucky? I think this is in Kentucky . . .), and it's up to him to break it. Eventually, his entire family will help―because the family that worms its way deep into a cave to fight demons they don't really believe in together, stays together. Now, there are good things and bad things about this flick, and I'll start with the good things: Shatner and the demons.

Sounds like a band name, but it's actually the two positives I come up with most quickly off the top of my head. William Shatner plays Hayes, John's father, and a mad crazy bastard is he. The curse is the reason for John's visions, and they're only going to get worse as the demons get closer. It's centered on that totem John saw and then lost in the cave (they call it the Relic), and Hayes is determined John will be the one to break this curse, pushing him at it mercilessly. If, like me, you decide to give this film a chance simply because you're a curious Shatner fan, I think he delivers. Hayes is an aged war veteran who still longs for the fight, and he isn't wrapped entirely tight. Every scene he's in, but especially his monologue on death being a soldier's reward, is Shatner gold.

This is, obviously, a film with a limited budget, and the demons are, essentially, people in masks. But the effects team working on the demons did a lot with a little, in my opinion. There's a bit of CGI involved here and there (the lead demon seems to have a nested mouth within its main mouth, a little like the xenomorphs in the Alien series), but the overall effect is pretty good.

However, I'm not a fan of Devil's Revenge, and if you've read my reviews in the past, you can probably guess why: the plot/story. It has some pretty massive holes in it. To be fair, making a movie is expensive, and you only have limited space in which to tell the story, and they were trying to tell a big story. I assume these holes weren't there to begin with, and what we're seeing is the scar tissue from excised scenes. But whether from scenes being filmed and then cut, or the original story being quickly trimmed to fit the allowable time, I wound up with what felt like obvious questions, but no answers.

I had more, but you get the gist. I've seen some small-budget films that were, despite their scale, wonders of storytelling, shiny little gems that took me by surprise. This . . . wasn't one of them. I could see what they were trying to do with it, and if they'd patched some of those cracks and holes before releasing the story into the world, it might have been different. For me, though, this just wasn't the action/horror movie it purported to be.

That being said, if all you want to do is watch William Shatner act like an angry crazy man, then click the rental button on Devil's Revenge (2019) and have at it, hoss. After all, that's what I did!


If you’ve got a film you’d like to shout out about, a monster movie you feel the world’s just got to see, please, let me know about it in the comments below—or if you’re shy, you can always shoot me a line through the Contact page.


I’d love to hear from you.


I do love me some monster movies.