October 28, 2019
Welcome to Monster Movie Madness, where we take a look at flicks and films dealing with threats and things that aren’t exactly human. Hell, most of ’em aren’t human at all—and those are the really fun ones! 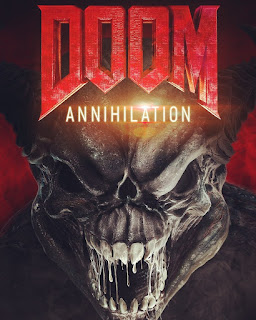 I chose four films to watch this month, each of which came out on video (and to Vudu) in the USA on the same day: October 1, 2019. I've looked at a flick with star power, then the first Pakistani zombie film, and then did my first crowdfunded movie movie review, all from October 1 of this year. How can I possibly round out my Halloween reviewing experience?

Why, a horror movie based on a video game, of course! When I played the original Doom―a cutting-edge first-person-shooter back in 1993―I had no idea someday I'd be watching (never mind reviewing) a film based on the successful game series: Doom: Annihilation (2019).

Written and directed by: Tony Giglio.


We begin in a top secret United Aerospace Corporation (UAC) base on Phobos, the larger of Mars's two moons. The Phobos base is in touch with another, UAC's Delta Lab, somewhere under Nevada. Dr. Malcolm Betruger (Dominic Mafham), on Phobos, prepares to transport Dr. Ezekiel Barnes (Nathan Cooper) from Delta Lab to top secret base, using a pair of gates, two ancient platforms―obviously discovered alien technology―one beneath Nevada, the other just off Mars. In theory, once the gates are activated, Barnes should be able to simply step onto one and off the other, a little over 48 million miles away.

One small step for mankind, right?

Each gate has two sections, an upper disc (on the ceiling) and a lower disc (yup, on the floor), like a giant alien Oreo without the Stuf. The gates are activated, and a different kind of stuff grows from both discs to meet in the middle―it's kind of like the skin that forms on pudding when left uncovered in the fridge, but without the actual pudding. It's just a column of puddingless skin. Yuck.

Barnes steps into the skin―uh, I mean, the gate (insert appropriate better-him-than-me face here)―beneath Nevada and steps out a moment later on Phobos. Hooray!

A second after the celebration begins however, base staff notices Barnes looks a little . . . off. His skin is gray, his eyes are black, and his fingers have grown into hooked talons―talons he bears at them while opening his suddenly snaggle-toothed maw to loose an otherworldly shriek. Whoops! Not hooray. Not hooray at all. Booooooooo!

Not being one to back down (or admit a setback), Dr. Betruger decides to step through himself. He powers up the pudding again, takes a breath, steps in―and the base goes haywire, lights and panels shorting out all over the facility. The place is in chaos when something comes back through the pudding skin, something . . . not nice.

But what timing! The Nola, a USC armored transport vessel piloted by Morgan (Cassidy Little), is about to complete its four-month journey, travelling from Earth to Phobos the old-fashioned way―kind of makes the pudding skin seem worth it, huh? On board are a whole Marine special ops unit led by Captain Hector Savage (James Weber Brown) and Lieutenant Joan Dark (Amy Manson), and accompanied by Dr. Bennett Stone (Luke Allen-Gale). It's a good thing they're there (though the unit doesn't see it that way), since Betruger apparently bounced, and he didn't exactly come back through the pudding skin alone. There are things on the other side of the skin of which man was not meant to know: demonic things with a taste for expansion.

And oh, sure, they're just pumping from their reality into ours on Phobos, 48 million miles away, but the other end of that doorway of desiccated chocolaty goodness empties out in a little lab under Nevada, and Nevada has no idea what's coming.

I found Doom: Annihilation in the horror category on Vudu, but I don't think it belongs there. I mean, sure, Doom the game had a few horror elements to it―monsters, demons, and other eat-your-face-off things―but it was no Resident Evil (1996) or Silent Hill (1999)―and I have a story about a parrot staring the bejesus out of me while I played Silent Hill, but that's for another day. As a game, Doom was a horror-themed first-person shooter, and a fun one, but the emphasis was on first-person shooter. Remaining true to its gaming roots, Doom: Annihilation is a horror-themed action film, with the emphasis on action.

The combat scenes are well done, none of them relegated to either melee or shooting in a space to dark for us to see what's going on. Knowing it's based on a first-person shooter (and having played Doom, way back when), I could see certain scenes were designed to be homages to the original game, with multiple targets coming from different directions, almost shooting gallery style. Have no fear this is all there is to the film, though, or even just to the combat scenes; they're varied enough that, had I not already known what the movie was based on, I might not have even dropped to the video game scenario.

The acting is . . . decent. Adequate. Good even, though this isn't the type of film to call for Shakespearean training or a wide range. It never claims to be. It's an action-driven scenario, and though that calls for both anger and fear, what it mainly uses is intensity and fierceness, both of which the cast portray admirably. Even in the more down-to-earth and touching scenes―and there are a few, I'll get to the writing and plot next―there was never a point where I felt the need to squint at whomever was on the screen at the time and say, "That's it, I call bullshit."

The writing is also well done―though again, this is a film based on an old shooter game. The action part of the plot might have come straight from a game (it's possible it did, I'm no expert), but the B plots (or sub plots) were also there, adding a bit of depth to the narrative and keeping it from becoming too gamelike as well as adding to the characters. Captain Savage looking forward to hanging it all up to spend time with the family. A past screwup of Lieutenant Dark's coming back to haunt her with the unit. Dark's former relationship with Dr. Stone. None of these things are really hammered―the current situation doesn't allow for it―but all serve to show this mission is just one instance of one facet of their lives and help keep the characters from becoming cardboard cutouts.