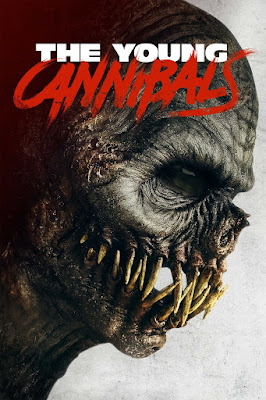 The action opens with three men sitting shivering in the snow. They're battered, beaten up, and have obviously survived something. Two are eating, voraciously, almost savagely; it's meat on the bone, and it's raw, and it's kind of gross. They offer some to the third man, who shudders and turns away―only to look at the body of a fourth, lying dead in the snow. We can only see the body's head and shoulders, but the implication is clear: we're looking at dinner, and he happens to have a Have a Nice Day smiley pinned to his hat.

Cut to the three survivors, two with blood-rimed mouths, the other clean, hiking along a trail. They're stumbling, exhausted, but still moving. Toward rescue? Civilization? We just don't know. One of the eaters suddenly looks behind them, shouts in terror, and takes off running. The other turns, looks, and runs off shrieking as well. The clean-faced man turns, but sees nothing, only open snow all the way to distant trees. His companions are quite obviously fleeing for their lives, but from what?

Then the second fleeing man lurches into the air, lifted by something the clean-faced man still cannot see―something invisible. As clean-face watches, the invisible thing flings his companion down in the snow and commences tearing him apart, turning the white landscape pink and red for yards around while the dying man screams. The other bloody-faced man turns, takes in what's going on, and grins―apparently at his good fortune not to be the one attacked―then takes advantage of the invisible monster's diverted attention to flee toward the treeline.

The opening credits roll. All this has happened, and we're not even into the movie proper yet!

We fade in to Nat (Megan Purvis) and Ethan (Benjamin Sarpong-Broni) lying on Nat's hospital bed. It's a psychiatric facility, and though Ethan's just visiting, the bandages about Nat's wrists tell us why she's there. It's her birthday, and Ethan really wants to take Nat camping with their friends, so he talks her into escaping with him―which they do in both humorous and exciting fashion. Of course they have to escape: the Vudu description of the film does say, seven friends summon a monster when they are tricked into eating burgers made of human flesh.  Thus Nat and Ethan must head out to the campsite to meet up with Pippa (Hanna Louise Howell), Frances (Kim Spearman), Mike (Michael Haynes), Cam (Martin Thomas), and Nat's estranged brother Teddy (Samuel Freeman).

The camp they're staying at happens to be run by a familiar face, one we last saw grinning at his own good fortune before escaping off toward the trees. I think we can guess what he's going to offer his new campers, don't you?

Okay, time for my opinions―and in my opinion, I've found the gem in my little released October 1 movie pile.

I have one complaint, and I'll get it out of the way right up front. I know they're lost in the woods, but the scenes showing them wandering seemed just a trifle drawn out to me. As did some of the monster stalking one of them scenes. Not much, and this is obviously my own personal preferences at play―but then, so is everything else I have to say.

The acting is there. The kids' characters are stereotypes, the kind you always see in the kids off somewhere getting into deadly trouble kinds of films, but none of them overplay it. Cam's the smart ass, but he's fun about it rather than being such a jerk you wonder why he has friends at all. Pippa's the self-absorbed pretty girl, but not so into herself she can't genuinely care for her friends. Frances is a little proper, a little nerdy, but not so brainy she's awkward in conversations with other people. I could go on, but you get the point: there's a fine line between being a walking bunch of stereotypes and portraying a diverse group of actual friends, but I think these kids―excuse me, young actors―get the job done admirably.

The cinematography is there. You hear crowdfunded, you might think handy-cam. I don't believe I had that as a conscious thought, but it was probably in there somewhere. I do know I went into this film with no real expectation of excellence. I was wrong. Every scene is well lit, well shot, and the sound is terrific. The special effects are minimal, I think―people being lifted and tossed by an invisible giant―but well done and seamless. I know nothing about the technical aspect of putting a movie together, but somebody (maybe a bunch of somebodies) over there at Bad Taste Pictures knows their shit, and knows it well. Several times I forgot this wasn't a big studio production, and it was jolting to remember it.

Finally the writing, which I think I do know a little bit about: it's there. The dialogue is good, which I'd imagine helped the actors do such a phenomenal job. The story is there, without plot holes, including things that are hinted at, allowing you to extrapolate more than is actually said. For example, all you have to do is listen to the villain's (Blackwood, played by David Patrick Stucky) accent―he's the only North American character in this very British film―while he gives just a bit of backstory to understand what the monster actually is, and why it's there in the English countryside: this is a displaced wendigo story that works.

To wrap it up, yes, if you're looking for a new monster movie to watch this Halloween, you could do much, much (you can maybe imagine a third much in there if you like) worse than plonking your cash down to see The Young Cannibals. I'd even go so far as to say plonking your cash down there would be a good thing. Possibly great, you'd have to make up your own mind about that. I'd never heard of Bad Taste Pictures, but damn me if they haven't shot to the top of my be on the look out for more list.

This is a happy Halloween!