October 14, 2019
Welcome to Monster Movie Madness, where we take a look at flicks and films dealing with threats and things that aren’t exactly human. Hell, most of ’em aren’t human at all—and those are the really fun ones! 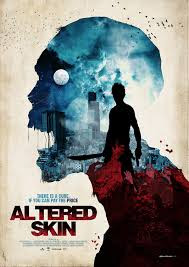 Continuing my Halloweeny peek at four films released straight to video on October 1 of this year (less than two weeks prior to this writing), I decided to watch Altered Skin (2019). I'm being straight up here: last week I started this little venture with Devil's Revenge (2019) because it starred (sort of) William Shatner (the Shat!); this weekend I appeared at both Rock & Shock and the Merrimack Valley Halloween Book Festival, so I chose Altered Skin because, at 80 minutes, it was the shortest on my list. Besides, the end of the Vudu description reads: The first film of its type to be shot on location in Karachi, Altered Skin brings a fresh cultural take to the zombie epidemic.
A horror movie with a fresh cultural take on zombies? Take my money!

Written and directed by: Adnan Ahmed
Warning: this review may contain spoilers.

Altered Skin opens with Pakistani news footage of people running and fighting in the streets of Karachi―utter chaos. The various newscaster voice-overs talk of a new virus called MN-2, which progresses rapidly through a host's system, eventually turning them into a carrier, a nearly mindless meat-machine of violence, with lesions, white eyes, and a cannibalistic taste for human flesh―think the Rage victims in 28 Days Later (2002), but a little less all-out-sprinty. The hero of our story is Craig Evans (Robin Dunne), an American ex-pat married to the most high-profile casualty of the first wave of the virus, Insiya (Juggan Kazim), a doctor who contracted MN-2 during a violent patient episode. Placed in a medically-induced coma to slow the progress of the virus, Insiya hovers on the brink of death while Ingenec, a Karachi-based pharmaceutical company, seeks to cure this plague ravaging their city. The best they can do so far, however, is a band aid remedy; a drug called Cidhar that, when used regularly, staves off the virus's advance. For a while, anyway.

Interrupting Craig's off-and-on bedside vigil, someone sends him a packet of documents―documents from Ingenec, covering Cidhar's early testing―and some tapes made by local investigative reporter, Shehzad (Aamir Qureshi). Trying to track down Shehzad to ask what's going on, Craig finds only Amina (Nimra Bucha), Shehzad's wife, the woman who sent Craig the documents in the first place. Shehzad has been investigating Ingenec. Sorry, had been investigating Ingenec. Shehzad, it seems, has disappeared.

That's not too suspicious, is it? Craig seems to think so, so he starts investigating the company himself.

Okay, you're going to get my thoughts from here on out. I'll try not to let things get too spoilery.

I started out not liking this film. I've seen a couple of other reviews while prepping to write this, and more than one pointed out that watchers going in expecting the usual blood-guts-and-gore zombie film are going to be sorely disappointed. I think I was one of those. I've seen it described as a thriller in more than one place, but I disagree with that designation as well. Just going by the feel of the film, I wouldn't call this either horror or thriller. I'd call it a drama . . . almost.

Let me explain. (pause) No. There is too much. Let me sum up.

I found the first half of Altered Skin kind of boring, and I'm going to blame some of it on my expectations walking in (see above), some on a single plot point, and the rest on the acting. Keep in mind this is all my opinion, and I have no experience in acting, so I feel a little out of sorts in doing this.

Robin Dunne, at least in this film, doesn't appear to be the most emotive fellow out there. He's a good-looking guy, moves well in scenes requiring athleticism, and delivered his lines well while doing so, and maybe he would have been a better fit if this really were an action thriller or horror-style film, but it's not. Altered Skin is paced much more slowly than that, and the motivation behind everything is Craig's love for Insiya and the fact that her life is hanging in the balance. Aside from a single scene where Craig argues with Insiya's father, Dunne seems to just walk through the action almost like an observer. From sitting at his wife's bedside to running someone down with his car to getting a good close look at piles of dead and rotting carriers―hell, even being attacked by one of the carriers himself―Dunne's attitude seems more suited to someone watching rather than participating.

This does not make for tense viewing.

All of that simply highlights the plot point I mentioned earlier, the one I had a problem with: everything is happening to Craig because he's the white guy. When Craig finds Amina and asks why she sent him all that information on Ingenec, rather than just going to the police, her answer is simple: "You're an American. You can do anything you want."

I realize there are massive cultural differences Ahmed was trying to bridge while writing this film, and I have no idea how that concept plays in Pakistan. In America, however, with our current sociopolitical attitudes, this'll strike a lot of viewers as relying on the great white savior, and may not work well. To be fair, this was the only problem I had with the plot, and it is one of preference rather than fact or continuity. The film itself, however, as I said above, also seems to be relying on this one man, but―and no offense meant toward Mr. Dunne―I don't think this was the vehicle for him.
Then Altered Skin threw me a curve ball in the second half. The action picked up. Craig has the obligatory shit, I'm surrounded by zombies and have to fight my way out scene (shot in the dark, unfortunately―surprising, considering Ahmed's background in visual effects). There is a chase scene, with Craig running from security forces. There is emotion and tension―specifically in the performances of Ali Kazmi (playing Nasir, an unwilling agent of Ingenec) and Salman Shahid (portraying Dr. Imtias, another unwilling pawn in Ingenec's game). Dunne seems to handle this type of scene better and, performance-wise, the entire film rises toward the finish.

Behind all this, I need to give some kudos to writer/director Adnan Ahmad. If not for the zombies (or the zombielike carriers, for those purists out there insisting that if it ain't dead, it ain't a zombie) kind of automatically forcing a horror tag onto it, the story he's written here could be marketed as a pretty tightly plotted and complex drama. I'm always looking for plot holes, but I didn't find any, and the introduction of new characters as the investigation progresses―and the investigation itself―really works for me. This is Ahmad's first feature-length film (he has a short in his credits from 2012, Sedare), and I have to say I'm impressed with his writing. A little more seasoning in the other facets of film making―casting, directing, pacing (and I did say a little)―and I'm looking forward to seeing what else this writer/director will do.

So, to sum up (again): if you're looking for a blood and guts zombie film with a Middle Eastern slant this Halloween, steer clear. This ain't a Pakistani Train to Busan (2016). But if you're in the mood for a drama featuring a few carriers, or are interested in a new (more calm and less gooey) take on the zombie outbreak story, give Altered Skin (2019) a try.