August 09, 2019
Recently, I watched the documentary 50 Best Horror Movies You’ve Never Seen (2014) on Tubi, and realized I already had a review for one of them. Just in case it is a horror movie you’ve never seen, here’s my review. Spoiler: I liked it. A lot. 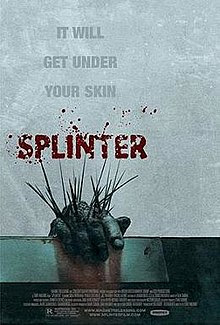 Welcome to Monster Movie Madness, where we take a look at flicks and films dealing with threats and things that aren’t exactly human. Hell, most of ’em aren’t human at all—and those are the really fun ones!


Sharp things. Pointy things. Sharp and pointy things. We see plenty of sharp and pointy things in horror movies, from the slasher’s knives to the werewolf’s claws to the vampire’s fangs—but what about something that’s all sharp, all pointy, all the time? Sound like fun? Let’s find out. Go rummage through the first-aid kit for the tweezers and Mercurochrome—oh, and see if you can’t find a flamethrower in there—as we get ready to extract a Splinter (2008).

The gas station looks to be in the middle of nowhere, just a road stretching off through the forest in either direction. But it is a nice sunny day, so, really, who can blame the bored attendant, Blake (Charles Baker), for grabbing a little bag of chips and a lawn chair and heading out to the parking lot to catch some rays? Blake kicks back, casually munching his snack and warming his bones—until there’s a loud rustle in the underbrush. Assuming a stray dog, he calls for it to scat, but gets no reaction. Blake gets up to investigate, when suddenly something low and dark bursts from cover, scrabbling across the grass lightning fast. We have a quick impression of teeth and quills and movement—somehow jerky and liquid at the same time—and it’s on him. He falls as it latches onto his legs, biting and stabbing. There is screaming. There is blood. There is a scene change.

Now we meet Polly (Jill Wagner), and Seth (Paulo Costanzo), a young couple in a Jeep packed with gear on their way into the woods for a nice, romantic camping trip. Oh, God, you say, not another “cabin in the woods” scenario! Haven’t we had enough of that? But then Polly and Seth get to their site and start setting up camp—including a tent. Oh, Lord, you say, not another . . . well, okay, I haven’t seen a lot of “tent in the woods” scenarios lately, but that canvas isn’t even going to slow down that fast-moving bundle of teeth and spikes that just ruined Blake’s day. How are they going to drag this out for 82 minutes?
Then Seth, in the middle of whining about being out in the wilderness, breaks one of the poles as they’re setting up the aforementioned tent. Oh, Seth, you say, you certainly are a useless whiner. I hope Spike—I’m calling the creature Spike—kills your ass first, so I don’t have to listen to you for an hour! Seth convinces Polly they should go find a cheap motel instead, saying they’ll still have the outdoorsy discomfort of sleeping with dirt and bugs, but at least they’ll have cable TV.

They’re driving along at just about dusk when a woman staggers onto the road. Seth votes they drive on—he is a whiny bitch, I’m not even kidding—but Polly’s made of sterner stuff, and she’s behind the wheel. The Jeep grinds to a halt on the grit-covered road, flaring brake lights garishly illuminating the woman staggering after them—and then a man appears, standing beside Polly’s door and tapping on her window with a pistol.

They’re being carjacked. Seth must feel so vindicated.

Seth and Polly meet their new passengers, Lacey (Rachel Kerbs) and Dennis (Shea Whigham). She seems nice, if moderately whacked out of her skull, while he is angry and has a gun. Dennis tells Polly to just drive, which she does, until something low and fast runs out of the darkness and onto the road, practically throwing itself under Polly’s wheels. There is a bump, a thud, screeching brakes, and a blown-out tire.

Polly and Dennis change the tire while Lacey and Seth walk back to check out whatever it is they hit. Loopy Lacey is convinced it’s Ginger, whatever that is, but all Seth knows is it’s got lots of long, thin porcupine-like quills, is leaking thick black fluid onto the road, and is quite, quite dead (and he’s working on his PhD in biology, so he would know)—until the thing suddenly moves. Yowza!

Polly and Dennis hurry through changing the tire, and while hastily rolling away the flat, Dennis gets one of the Ginger-thing’s spines, still jutting from the rubber, stuck in his own finger. He curses, plucks the splinter out, piles into the car with the rest, and it’s away they go . . . until the radiator hose, slashed by the thing’s spines as they ran over it, bursts. The coolant goes bye-bye and the Jeep starts to overheat, just in time for them to pull over at a gas station they find in the middle of nowhere, the road stretching through the forest in either direction—

Wait a minute! Isn’t this where we came into this picture? Why sure it is, there’s the abandoned lawn chair out in the parking lot and everything. And of course there’s no sign of the attendant—until suddenly there is, only he’s not really Blake anymore, but a disjointed, jerkily moving, spiky mess, much like the thing (the Ginger-thing?) that attacked him that afternoon, almost as if he were infected by the thing’s spines; spines just about identical to the splinter Dennis pulled out of his finger earlier, by the Jeep—a finger that, as they lock themselves into the convenience store/gas station to be safe from the Blake-thing, looks swollen, and bruised, almost . . . infected.

Okay, I have to say that, story-wise, I love this setup. It’s a siege much like many of the cabin in the woods style movies, but with the added threat that the entire front of the supposedly safe building is nothing but plate glass, somewhat reminiscent of one of my favorite monster-siege stories, Stephen King’s The Mist. Stacked on top of that is the fact that none of our heroes have ever been in the building before, so we get to go with them in their somewhat panicked exploration, discovering things about the place sort of in real time.

Even better than the physical setup is the emotional one: this isn’t a bunch of friends on a weekend retreat who are under attack, these folks are enemies when the feces hits the fan. People who wouldn’t mind seeing each other dead—might even consider it an improvement—suddenly have to rely on each other for survival. Dennis and Lacey were doing their best to make sure Seth and Polly couldn’t call for help—throwing their cell phones from the moving car, etc.—and now it’s all turned against them.

The creature in this film is frightening and fun (yeah, I have an odd sense of fun) as well, with its deadly spines (both stabby and contagious) and habit of snapping its host’s bones to make new elbows and knees at will, along with the ability of bits of the thing to live on after amputation, making the one creature, effectively, many. Before watching Splinter on Shudder, I saw a user comment referring to it as a small-scale version of John Carpenter’s The Thing (1982); with this creature’s infective/invasive capability, and the way bits that drop off become threats of their own, I think the comparison is apt, and in the most complimentary way.

The effects work well in this film, in part, I think, because you don’t get a lot of clear views of the monster as a whole. You do get good looks at a few of the spiky, disembodied chunks of the thing, and those, combined with long views and quick, flashy close-ups, allows you to extrapolate quite a bit, relying on the viewers’ imaginations somewhat, as much good horror does.

The acting is better than horror-movie-average, allowing a six person cast to pull off a lot in an hour and twenty-two minutes, and the writing is also good, the plot well thought out, covering everything from the overall setup (described above) to Seth being a nebbishy biology grad student, lending credence to his observations about the creature and how it appears to work.

My final thoughts on Splinter (2008)? If you like monster movies, this is one to see. It has all the elements of a good horror story, uses them well, and was a really pleasant surprise for something nine years old I’d never even heard of—so much so that if this writing/directing team has another one in them, I’d make checking it out a priority.

If you’ve got a film you’d like to shout out about, a monster movie you feel the world just has to see, please, let me know about it in the comments below—or if you’re shy, you can always shoot me a line through the Contact page.