Author's Note:
This was the first review I ever wrote for Cinema Knife Fight, published back in 2015. The exact publication date was lost along with the site itself (see the About page for the fuller story), but I believe it was in March. It's a little long, but hey, I was learning. I'm using it as my first post again mostly so I can look at it and saw "Awww . . ." 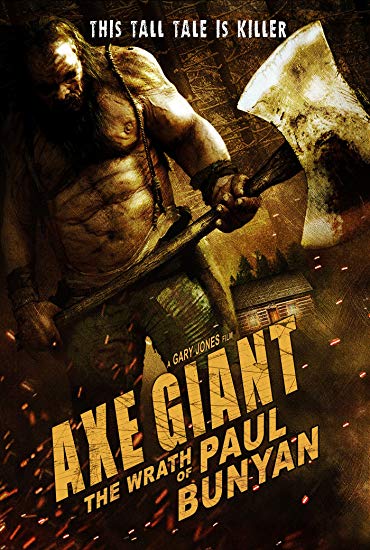 (Warning: there are spoilers in this review.)

Gary Jones, Jason Ancona and Jeff Miller took the beloved story of Paul Bunyan, an American tall tale about the helpful giant lumberjack who accidentally made the Grand Canyon and—whoops!—stumbled one day to make the Great Lakes, and rewrote him as a savage, vengeful, titanesque idiot, and then handed the whole thing to Gary Jones to direct.

What could go wrong?

If you’ve ever seen a horror movie from the ’80s then you’ll probably recognize the setup: a bunch of young city-folk heading off into the woods, far from police, hospitals, even Starbucks. Do you know how far into the bush you have to go to get away from Starbucks?

This particular group of five young folks (the stereotypical Bad Boy, Nerd, Whore, Virgin, and Hooker with a Heart of Gold) happens to be a bunch of first offenders, spending the week in some sort of scared straight program run by Minnesota Department of Corrections’ Sgt. Hoke (Thomas Downey), who’s seen Full Metal Jacket (1987) too many times, and appears to have an R. Lee Ermey fetish. They are accompanied this time out by their touchy-feely everything will be all right if we can just talk about our feelings therapist, Ms. K (Kristina Kopf), and for a while the scariest thing they see is their eccentric hermit of a neighbor, Meeks (played by a hopping, giggling Joe Esteves—the poor man’s Martin Sheen).

They run. They camp. They have aborted sexual trysts in the night (very 1980s). Sgt. Hoke gets to shout “Drop your cocks and grab your socks!” just like his hero, R. Lee. In fact, everything’s going just swimmingly—until someone desecrates the grave of Babe, the Blue Ox. Because that’s just what you do when you find a pile of huge bones while you’re on a punishment run through the forest: mess around in the pile, and then stuff a three-foot horn into your backpack as a heavy, hard-to-carry souvenir.

Enter Paul Bunyan (played by Chris Hahn, in an impressive bit of makeup for a B-movie), with the earth-shaking tread of your better class of T-rex, his gleaming blade cleaving a young girl in twain as she tries to text her friends about how much fun she isn’t having.

Did you get that little public service message, kiddies? Texting kills.

What follows is a bloody romp through the forest with people dodging (though not always) a razor-sharp axe-head the size of a barn door, while being chased by a 50-foot mutant lumberjack with poor dental hygiene, who alternately stumbles about like a drunken skyscraper or moves with whisperfoot stealth that allows him to sneak up on bears and deer completely undetected.

This film has everything you could hope for in a giant monster movie: a vast footprint in the soft earth for someone to place a palm into in awed comparison; close-ups of a huge hand reaching for someone (a woman, always a woman) with drawn-out, dramatic slooooooowness, allowing plenty of time for screaming and crying—though none, apparently, for scrambling away; the goliath axeman even runs at “monster speed”—he’s just fast enough to swipe the axe through the air near your head, though not quite fast enough to catch you, whether he’s running after a wounded teenager stumbling through the underbrush or chasing down the sheriff’s GMC pickup truck on an open road.

Is the dialogue terrific? No.

Is the cinematography breath-taking? No.


Does it really star Dan Haggerty of The Life and Times of Grizzly Adams (1977-1978) television fame, as the IMDB page clearly claims? No. He’s in the film for about ten minutes, and spends a lot of that time weeing in the woods—though I have to admit, the guy looks great for a man in his seventies.

Then why did I watch the damn thing twice, and will probably watch it a third time?

Because if you’re looking to just sit back and be entertained by the nostalgia of B movies you grew up with, all those things up there make it just bad enough to be good. And there are some serious pros to the movie as well:

Joe Esteves, as the maniacal Meeks, giving the most wonderfully over-the-top, eccentric storyteller performance you’re likely to ever see, when he gives all the backstory nobody should know.

The thought that, in Minnesota, when the local sheriff gets on the radio and calls for help with no details, the whole town shows up armed for bear with automatic weapons, and not one of them points at the 50 foot, axe-wielding neanderthal and asks “What the hell is that?” before opening fire. Now that’s what I call good people.

The full body suit and mask Chris Hahn had to wear for the role, a mask built specifically to fit his face and then, essentially, glued into place so the features of the mask mimic the movements beneath it, allowing him to “act” right through the prosthesis. Angry, sad, confused, Hahn manages to show it all through what is, in essence, a foam helmet. Considering the 90-pound suit he was wearing, he did a pretty fine job acting and moving naturally as a giant monster.

At one point Hahn (as Bunyan) speaks, and there is a wardrobe malfunction. Either the glue fails, or the mouth of the mask is too stiff, or both, but the lips of the mask refuse to form the letter O in no. It’s a close-up, and for just a moment you clearly see Hahn’s lips inside the mask’s lips. Now, I know this sounds like something that should be in the cons list, but I have to tell you: I live for catching stuff like this! Definite pro!

Just to share the way my mind works, there’s always something in these types of movies that punches a hole in my suspension of disbelief. I’m the kind of guy who will point out that the wings of a fire-breathing dragon lack the surface area to create enough lift to allow the creature to fly. It’s okay that it’s a dragon. It’s okay that it talks and breathes fire. I’m good with all that. The thing I can’t swallow is the weight-to-lift ratio.

This movie spawned a phrase in our house that my son is tired of hearing, though he now says it even more than I do:

The axe grew with him!

Yup, that’s right. His clothes are in tatters, held together with ropes and patched with furs, the toes of his feet poking right through the rags he’s using for boots. Somehow, though, this mammoth mountain man with the mind of a child, who’s been reduced to caveman status, has managed to get hold of a finely made, well-honed, double-bladed woodsman’s axe—with a hickory handle the size of a telephone pole.

If you’re in the mood, however, to pop some popcorn, relax, and watch a slightly nostalgic, slightly over-the-top B-movie, the likes of which you might have seen on The Creature Double Feature when you were growing up, with a side-order of little mistakes to spot as a drinking game on the side, then I think we have a winner! Slot this flick into your Netflix or Amazon queue, kick back and enjoy!

. . . and, as an added bonus, while I was doing a little research for this column, I made a discovery that gave me a smile: apparently there’s a sequel in the works! Booya! You can’t keep a good monster down.

I can hardly wait.